Alternative Futures of the Paris Commune 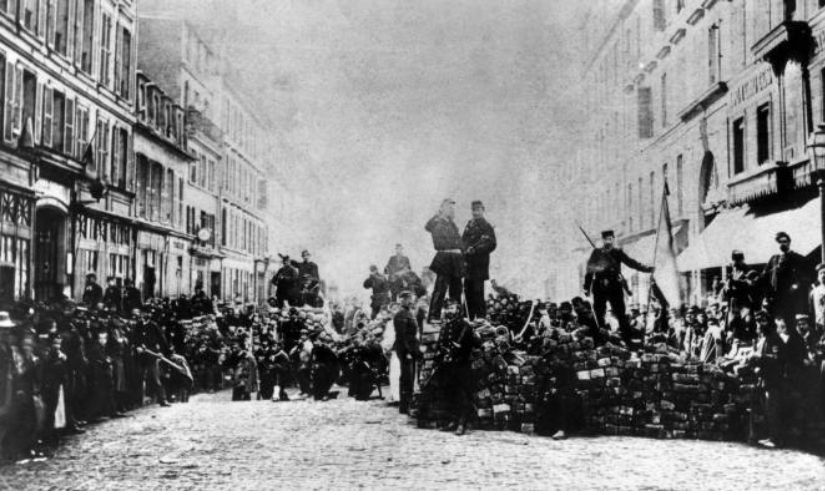 If we are to think of alternatives to the heedless, vampire-like drive of technology capitalism, there are examples from history that are worthy of consideration. In looking back we should not dwell on the elites, who tend to dominate the social and cultural life of each generation by default rather than through any test of merit. By far the most interesting ideas about how to build alternative futures have instead come from below. Our past is full of these kinds of struggles, though they tend to be less well documented than the great-men-of-history narratives. People have been reinventing the received wisdom on how the world works for generations, and there is much to learn from these movements and struggles.

One iconic example comes from the tumultuous nineteenth century, just a few years before Bellamy published Looking Backward: the Paris Commune of 1871. It was a time when the French Revolution still loomed large in people’s memories, and industrialization was wreaking havoc on traditional ways of doing things—not unlike how digital technology is transforming industrial production and social relationships today. As Bertell Ollman put it, “some were delighted by these developments, most were appalled, and everyone was amazed.” These transformations destabilized the political balance of the continent. By 1871, the people of Paris were thoroughly sick of bearing the costs of imperial wars, which disproportionately fell to the poor and working people of France. Their new president, Adolphe Thiers, sensed the importance of imposing centralized control over the city, as it became clear that activists were gaining political momentum in the nation’s capital by putting forth a more radical and democratic vision of a republic.

Paris became the epicenter of a face-off between the old ruling regime and the discontented workers. After suffering through a particularly bitter four-month-long siege at the hands of German armies, the local National Guard sensed the moment of disquiet and began to organize themselves into an alternative form of government. Ensconced among the radical residents of Paris, the National Guard refused orders from Thiers to disarm the people. The situation became so unstable that Thiers decided to abandon Paris and set up government in Versailles, and the entire elite fled the city to follow him. The Communards, as they called themselves, took power.

In the months that followed, they turned Paris into an autonomously organized society, a commune that experimented with alternative ways of structuring social and political life based on collaboration and cooperation. These improvised forms of self-government were so bold and transformative that they still provoke discussion and debate, a century and half later. They provide invaluable raw material for understanding alternatives to a society built on economic class and civil representation, opening up possibilities for deeper engagement with the ideas of democracy and equality that are worth examining today.

Who were the Communards exactly? Surveys taken later found that only a small percentage of them were professionals or small business owners. A full 84 percent of those left in control of Paris were manual laborers or wage earners. In this context, what happened next was probably a surprise to Thiers and his fellow elite, who showed contempt for the rabble they considered below them in social status. The Commune government addressed their constituents: “You are masters of your destiny. Strong in your support, the representatives that you have just established will repair the disasters caused by the fallen powers.” Their manifesto was plastered on the walls of Paris:

The recognition and consolidation of the Republic, the only form of

Government compatible with the rights of the people and the regular

and free development of society … The absolute guarantee of individual

liberty, of liberty of conscience and liberty of labour… It is the end of

the old governmental and clerical world, of militarism, of monopolies,

of privileges to which the proletariat owes its servitude, the country its

True to this promise, the Commune unleashed some of the most radical ideas of participatory democracy the world had ever seen. The Commune abolished conscription and the standing army; it decreed the separation of church and state, and converted all church property into national property; it declared education free, fixed the salaries of all judicial and associated justice workers, liberated political prisoners, suspended the payment of all rents for six months, publicly burned the guillotine, closed pawn shops, and abolished night work for bakers. That was just the beginning.

Workers began to organize their premises in ways that were decentralized and locally governed, with democratically elected administrators setting wages and enforcing limits on the length of the working day. They demanded equality and autonomy: “fair remuneration for their work, freedom of public assembly and the election of their own Municipal Council.” The women of Paris embraced the opportunity for change presented by the Commune. They formed a Union des Femmes, advocating for equal pay for women working in factories in Paris, and were given significant public responsibilities by the Commune. It was the Commune’s largest and most effective organization. Women achieved positions of power in the administration of the Commune that were unprecedented for the period. Marriage laws were liberalized, the administration offered financial support for both legitimate and illegitimate children of soldiers, and women even adapted their attire to suit the revolutionary moment. A Federation of Artists was formed, democratizing the administration of the fine arts in Paris and advocating for the funding of promising young artists who challenged establishment tastes. The president of the federation, the painter Gustave Courbet, summarized the prevailing feeling: “Paris is a true paradise … All social groups have established themselves as federations and are masters of their own fate.”

The central motivation of the Commune was the urge to improve the lives of the poor. These people had lived side by side before they took control of the city. They had fought as soldiers; they had worked together in factories; they had experienced the daily humiliation of being poor in Parisian society, beholden to the whims of the elite. Through the process of struggle, they found they had a common notion of the enemy but they also began to develop shared ideas of how their skills and ingenuity could be put to use.

This outcome was hardly planned or expected. In writing about the Paris Commune, Marx talks about how the working class “did not expect miracles.” They did not have a plan or destination in mind when they tore down the oppressive society they found themselves in. They had “no ready-made utopias to introduce by decree of the people,” Marx wrote. But the Communards were a living example of how “any conditions which arise in historical time are capable of disappearing in historical time.” They showed that it was possible for ordinary people to seize control of their own destiny, without the need for technocratic, religious or wealthy elites presiding over social affairs. As professor Kristin Ross puts it: “The Communards had not decreed or proclaimed the abolishment of the state. Rather, they had set about, step by step, dismantling, in the short time they had, all of its bureaucratic underpinnings.” The outcome was visionary for the time, Ross says, but (I would argue) also by today’s standards: “it produced a greater philosophy of freedom than either the  Declaration of Independence or the Declaration of the Rights of Man, because it was concrete.” The Paris Commune showed how cities and communities can be rebuilt in radical new ways, not by “innovating” their way out of social problems, but by empowering people to make decisions collectively.

Power in the hands of those disenfranchised by the system of industrial capitalism opened up a whole new way of doing things, where everything from work to social life and even artistic expression could be arranged differently. The process of struggle, Marx wrote, “set free the elements of the new society with which old collapsing bourgeois society itself is pregnant.” In the rubble of the old structures from which the Communards were trying to break free, in the daily life of sharing, solidarity and attempts to build a new society, they found a map to a new way of existing that until then they had only conceived of in their imaginations.

Ultimately the Commune was crushed. The “Bloody Week” in which Thiers, with a strengthened army, reconquered Paris resulted in around 25,000 Parisians and 877 soldiers slain. Thousands more Communards were imprisoned or deported to New Caledonia. As Carolyn Eichner put it: “The virulence of Versailles’s violent repression of the Commune reflected the enormity of its perceived threat to existing gender, class, and religious hierarchies.” It would be remiss to downplay such tragedies, and wrong to pretend that everything the Communards did was right or noble. But it would be foolish to equate the failings of the Communards with the catastrophic repression by Thiers. It would be equally unwise to judge the Commune’s historical value in the light of its defeat.

The Commune tells us that it is possible to think of other ways of organizing, that alternative practices and principles for running society can spring forth, quite quickly, from the existing fabric of relationships and communities. Ordinary people can cooperate to render previously unshakable convictions about how things get done as fragile as gossamer. Working people are not stupid or gormless, and they require no “visionary” technologists to tell them how to run society. They have ideas of their own, and often they are pretty good ones.

Compare the ideas that emerged from the Paris Commune to, say, the thoughts of Marc Andreesson, the venture capitalist and cofounder of Mosaic and Netscape. Andreesson has long been idolized as a genius of Silicon Valley. “No one has done more than Marc Andreessen to change the way we communicate,” writes Chris Anderson in his modestly titled profile, “The Man Who Makes the Future.” Andreesson has been described as “an evangelist for the church of technology.” He is not a utopian in the formal sense and does not describe himself as such, but he does believe that advancements in technology in their current form are beneficial, and he has done some thinking about what this might look like in the future.

In 2014, Andreesson wrote about his vision for the world of tomorrow using a thought experiment. “Imagine a world in which all material needs are provided for free, by robots and material synthesizers.” This kind of reality could solve some of the world’s largest problems, a consumer utopia where people spend time pursuing creative, cultural and scientific ambitions, Andreesson claimed.

At base, however, his vision was little more than a rather drab idea of ultra-capitalism: “I am not talking about Marxism or communism, I’m talking about democratic capitalism to the nth degree. Nor am I postulating the end of money or competition or status seeking or will to power, rather the full extrapolation of each of those.” Andreesson sees many of our collective problems, including inequality and unemployment, as functions of a society that clings to old ways of regulating and incentivizing economic activity. For him, a more fulsome embrace of technology capitalism will serve to strengthen society. Rather like the first wave of technological utopians, the folks who love creative destruction are also remarkably conservative in their thinking. “Firms trumpet their boldness, yet they often follow one another, lemming-like, pursuing the latest innovation,” writes Tad Friend, about the venture capitalist firms of Silicon Valley, including the one that Andreesson founded. A tendency toward utopian thinking about technology makes it logical for someone like Andreesson to argue for more capitalism to solve the problems of capitalism.