How we fight the border industrial complex 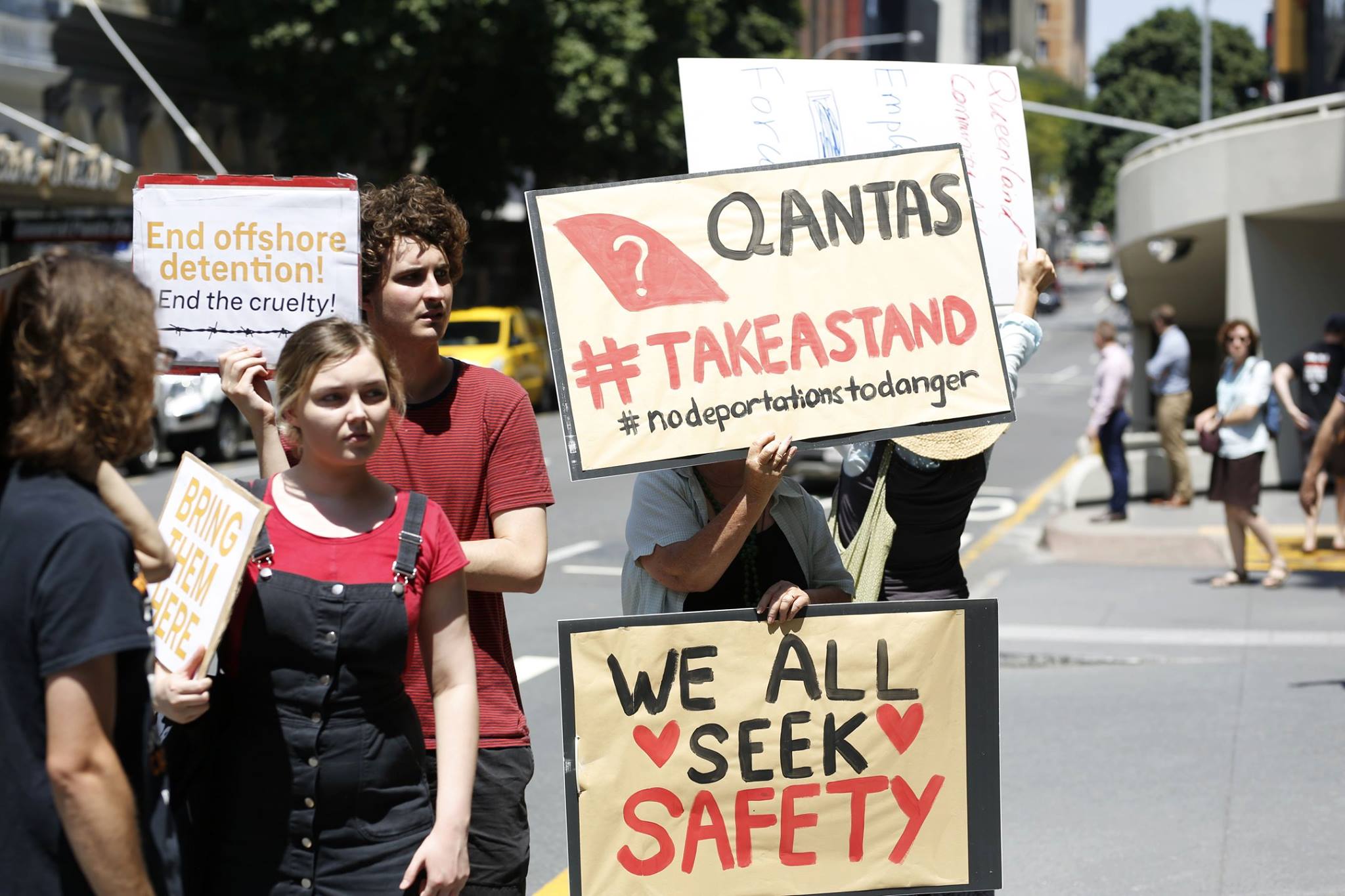 Watching the family from Biloela as they have tried to avoid deportation to Sri Lanka, many people around the country have also gained an insight into the political economy of border security. Activists have turned their attention on contractor Skytraders, who flew the family to Christmas Island. This is a company that profits from a government prepared to spend significant amounts of money on policies designed to deter vulnerable people seeking asylum.

But Skytraders isn’t alone. The national carrier, Qantas, has been facing heat in the last few months as activists organised around a demand that it stop facilitating forced deportations of people seeking asylum. The company has managed to project a stellar corporate image in recent times, not least for its historic stand in support of same sex marriage in 2017, explained by CEO Alan Joyce on the grounds that ‘that’s what good businesses do’. But that goodwill may be starting to melt away, given a recent open letter signed by prominent LGBITQ Australians and international allies in support of the campaign to stop deportations to danger.

Qantas’ line is that it is not its job to decide asylum matters and that the government is better placed to do this. But it is not clear whether this will hold from a branding perspective, given that being implicated in human rights abuses is increasingly bad for business.

The facilitation of deportations is just one part of a much bigger ecosystem of a cooperative political economy that profits from enforcing borders. The intersection of border policing, militarisation and financial interest is often called the ‘border industrial complex’. Borders are not just a line on a map decided by politicians, they are constructed by the state and upheld, in partnership with private entities, through walls, weaponry and advanced surveillance technologies. That construct can take quite complex forms, economically and politically.

For example, Todd Miller, author of Empire of Borders, has argued that borders are continuously being ‘pushed out’. So, while Trump has made his border wall a signature policy of his presidency, the crude simplicity of the idea conceals a much more complex reality. As Miller points out, then secretary of the Department of Homeland Security Gen John Kelly has commented that the border between the US and Mexico is not just a line in the desert. ‘The defense of the southwest border,’ Kelly said, ‘starts 1500 miles to the south, with Peru.’

In that sense, forced deportations by airlines are the last line of defence of the border. For Australia, the first line of defence is in places like Nauru and Manus Island, where corporations are contracted to run detention centres on behalf of the Australian government in entirely different, sovereign Pacific nations. In this way, Australia has become the worst kind of leader, and Donald Trump has said he’s interested in following its example. However, for many other nations the constantly expanding field of operation that is collectively known as ‘border security’ cannot be managed by the state alone. It relies on military technology companies, logistics companies, the construction industry and other service providers.

The business of borders is therefore a very big one. ‘At the end of the Cold War,’ scholar Elizabeth Vallet has observed, ‘there were just 15 walls delimiting national borders’. Her research shows that there are now at least seventy-seven. ‘The wall has become the new standard for international relations,’ she concludes. The same companies doing business in places like Palestine, Jordan and Syria, sell their ‘field-tested’ technology into markets in the developed world, like the US. ‘The global border system propagates and standardizes itself,’ argues Miller, ‘a globalization of essentially oppressive technologies of exclusion and division for profit.’

This apparatus designed to profit from division and fear is now the subject of increasing attention from activists, and they are getting results. Unions and pension funds have published reports and passed resolutions against investing in industries that profit from abuse. Major banks have begun to divest from the private prison industry, after activists campaigned around the problems of mass incarceration and immigration detention. The days in which companies could heedlessly profit from the misery of vulnerable people may be coming to an end.

The critical context to these trends is – as it is with everything – the climate crisis. The Internal Displacement Monitoring Centre recorded 18.8 million new disaster-related internal displacements in 2017. Environmental disasters such as droughts and floods, as well as secondary consequences like disease and food and water shortages, will come to define how people move around the world in coming decades. It is therefore a mistake to think of climate change primarily as the destruction of natural environment to the point of existential crisis. Just as devastating are the efforts of the wealthy to protect themselves from the crisis at the expense of everyone else.

Borders are not just political and economic: they are ideological. They are about creating what Alexandria Ocasio-Cortez calls a ‘systemic cruelty [with a] dehumanising culture’ that allows a line to be drawn between people we care about and those we consider dispensable.

It need not be like this. If even a small fraction of the budget for border security was devoted to climate change mitigation strategies, we could build a sustainable society with the capacity to respect human rights. To get to this point will require systemic change to rehabilitate our planet but also more local action designed to resist the border industrial complex.

The Association of Flight Attendants in the US appreciates the importance of this. In June, it passed a motion unanimously to oppose the inhumane and unsafe treatment of detainees at the southern border, and to encourage its members to take action around the complicity of airlines in the transportation of migrants. In Germany, 222 planned deportations were classified as having ‘failed’ due to pilot refusal. Virgin Atlantic has ceased cooperating with the Home Office in the UK to facilitate forced deportations. This is a growing movement, and it will continue to target those companies that abuse people and the planet for profit.