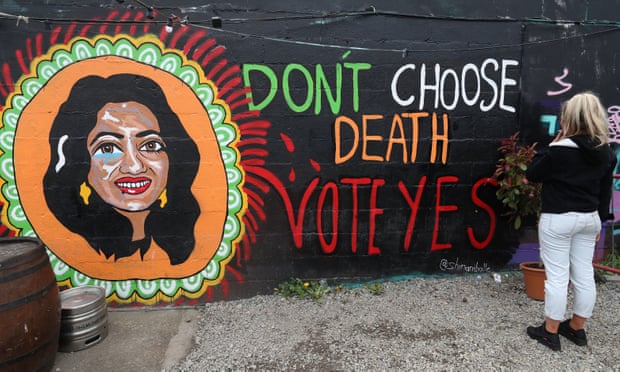 Women’s reproductive rights have been ill-served by top-down politics. The campaign to repeal the eighth should inspire us all

No matter what happens in Ireland’s abortion referendum on Friday, the campaign should serve as an inspiration. For too long, women in Ireland and elsewhere have paid the price for the notion that abortion is electoral poison and no good will come of politicians campaigning on it.

The eighth amendment to the Irish constitution, introduced in 1983 and valuing the life of the mother and foetus equally, in effect prohibited lawmakers from regulating abortion. This law has had insidious and devastating consequences. In 1992 women were given the right to travel abroad to obtain an abortion, and about 170,000 women have, usually to England, effectively sweeping the issue under the carpet. In 2012 the case of Savita Halappanavar brought the issue back home. Seventeen weeks pregnant, she went to hospital in pain and began to miscarry. She was denied an abortion and later died of septicaemia. Partly as a result of this tragic case, the sense grew that this law had generated a crisis in women’s health, but there was little appetite to take the necessary steps to achieve reform.

In 2016 the deadlock was broken by the Citizens’ Assembly, 99 people chosen at random by the government as a broadly representative sample of society. It was an initiative of the power-sharing Fine Gael and Labour coalition, an opportunity for them to outsource policy consideration. Abortion was one of several areas the assembly was asked to consider. This could have resulted in deflection and inaction, but it turned out to be the opposite. It allowed women’s organisations, including the Dublin Rape Crisis Centre, to contribute to the process. It gave a group of decision-makers the opportunity to consider expert evidence and stories from affected individuals, while putting aside partisan politics.

Their recommendations were upheld by a joint committee of the Oireachtas (Irish parliament) in December 2017, and have formed the basis for the referendum and proposed reform. The campaign to remove the eighth amendment has not been won. But the debate has been a huge step forward in itself. Just as decriminalisation of abortion is about asking society to trust women, the Citizens’ Assembly shows the power of trusting everyday people, especially when traditional, top-down politics has failed.

Such an approach may not be right for all policy areas. But our current mode of politics has produced a democratic deficit. Many people feel politicians do not represent them. Experiments in alternative ways of giving people a greater say in how they are governed will be essential if we are to overcome this problem. Women can feel heartened that in situations where politicians – the majority of whom are men in nearly every country in the world – may be reluctant to act to protect their interests, their fellow citizens may step in.

Should the campaign against the eighth amendment win, important work remains. The regulation of reproductive health will be critical to ensuring that women are able to exercise their rights without fear of harassment. If the eighth amendment is repealed, an article will be inserted into the constitution to allow the government to legislate for abortion.

The bill being proposed, a product of the Citizens’ Assembly process, includes abortion access up to 12 weeks without restriction. Beyond that, it will only be allowed if there is a threat to the health or life of the mother, or in cases of fatal foetal abnormality. It will be a GP-led service, but doctors will be able to conscientiously object. The constitutional amendment will allow elected officials to consider this bill, but it will still need to be passed for women to access abortions in Ireland.

It is critical that law-makers listen to women as they design new policies. In order for a woman’s right to choose to mean anything, any legislative regime must facilitate proper access to care, and incorporate protection for staff and patients of clinics. In an uncomfortable parallel with the situation in Ireland, Tasmanian women are now travelling to the Australian mainland to access reproductive health care, after the last private abortion clinic on the island was closed. Properly resourced public health services, protected by access zones, must be a component of proposals for reform. Consultation with service providers and medical practitioners can help avoid a situation where the right to reproductive healthcare exists in law but not in practice.

Like other Irish citizens living abroad, I am ineligible to vote this week. But I am making my voice heard, fundraising with other Irish citizens to support the Together for Yes campaign. Like many women around the world, we know how difficult it can be to win reforms in this area, especially against well-resourced opponents. But our efforts are fuelled by our shared experience and our determination to convince everyday people that they are right to trust women.