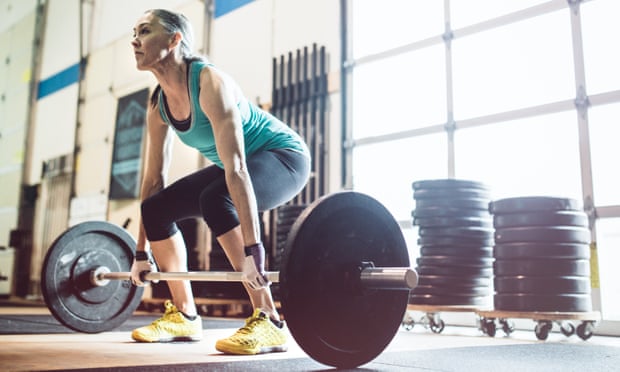 We’re always told to diet and tone – to take up less space, rather than more. Now I’m pumping iron and proud to be expanding

I remember the first time I tried to pull a bar off the floor loaded with two big weights. Unease pooled in my stomach. My trainer was patient, perhaps a little bemused. “I’ve never met anyone who couldn’t deadlift 130 pounds,” he said flatly. But, I thought, he had also said he’d never trained anyone as short as me. I frowned up at him, wedged myself under the bar, rolled back my shoulders, and pulled for my life. At the top, laughter spilled out of me, in exhilaration and disbelief.

Weightlifting is often something you are warned against, as a woman. The squat racks are routinely draped with dudes. Exercise classes, attended largely by women, are full of disclaimers that the exercise will not “bulk you up”. Being toned and lean is the goal: taking up less space rather than more.

All of which is part of what makes lifting so appealing. It is about expanding out. A large butt is an achievement; thick thighs are not a source of shame; arms that strain the seams are an accomplishment. Rather than seeing your body through the lens of others, you feel it swell and harden under the quixotic influence of your own agency. When I started to lift heavy, my clothing began to feel tight – less because I was using it to keep my embarrassing bits in, and more because my muscly parts were busting out.

The feminist movement has often concerned itself with finding ways for women to be valued other than for their appearance. It’s a laudable and necessary goal. But empowerment is not just an intellectual pursuit, and also involves finding ways to feel comfortable in your own skin. It is about learning to respect what you and your body are capable of, rather than feeling steeped in shame because you fail to meet arbitrary social standards.

Strength training builds the exact skills we need to advance women’s rights: persistence, bravery and an understanding of how short-term goals lead to long-term victories. It can also be a place to practise coping with extreme physical pressure. I go boxing regularly for the same reason – to undergo a discombobulating experience, and find a way to calm the mind and work out how to survive.

This is not to say that the onus should fall on women to figure out how to navigate themselves out of violent or damaging situations. Challenging men’s harmful behaviour and the systemic practices that oppress women should be the focus of feminism in the year of #MeToo. Physical empowerment is a separate goal, but it is also one that can be surprisingly gratifying – especially when you’ve spent much of your life being told you are weak.

Women training for strength is not a new phenomenon. This is not for everyone, and there are other ways to produce similar benefits. The gym is not a place to pay penance for the last doughnut you ate with hours on a treadmill, nor does it have to be the most important part of your day. But I want to give my body the best chance of surviving for as long as possible. And while I do not define myself by the gym, it can be a place where you feel a sense of achievement and pride, and plan how you are going to make the world better.