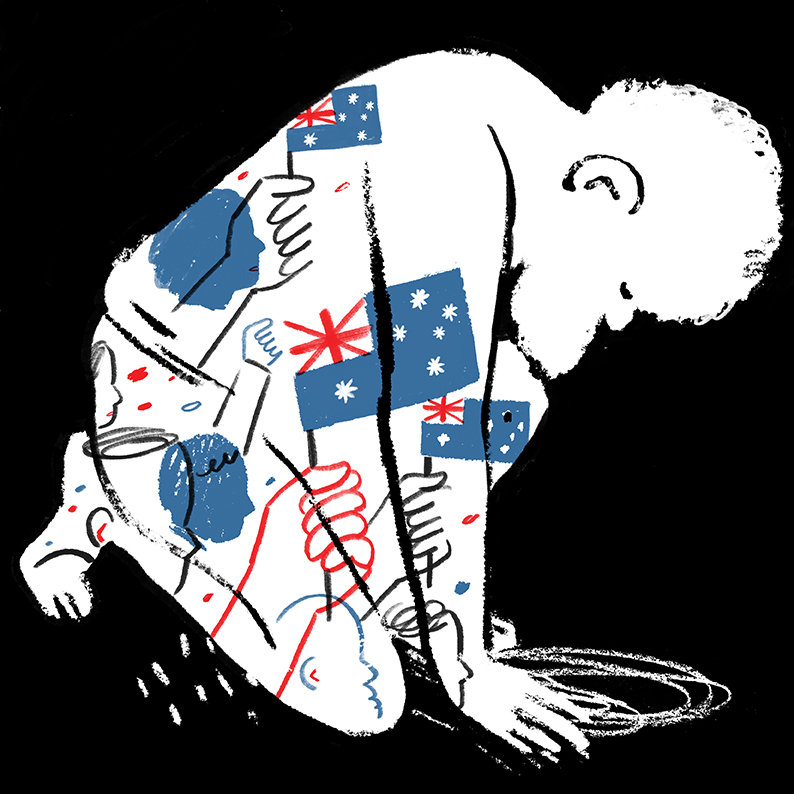 With Amy McQuire – Our national holiday fails to recognize a legacy of genocide.

Every year on Jan. 26, at the height of summer, Australians pull out their flags and barbecues, and raise a glass for Australia Day. But as the nationalism rises with the temperature, so does the anger and alienation felt by Aboriginal people, and increasingly, many other Australians.

The date commemorates the landing of the First Fleet in Sydney Cove in 1788. Around 1,400 people arrived, half of them convicts, transported from England to establish a penal colony. In the aftermath of the American War of Independence, the British needed a new place to send criminals. The colonizers and their courts considered Australia “terra nullius” or “land belonging to nobody,” a legal fiction used to justify the theft of Aboriginal land over the next two centuries.

White Australians celebrate this as the beginning of their history, but little space is given to Aboriginal people, like one of the authors of this essay, Ms. McQuire, who on this day mourn the attempted destruction of their own nations. Aboriginal people have instead rebranded this as a day of mourning, calling it “Survival Day” or “Invasion Day.” The time may be coming when this kind of rebranding captures the attention of a much broader public.

Conflict with the local Aboriginal population began almost immediately after the First Fleet’s arrival. It remained a constant feature of the frontier over the next century. White settlers poisoned water holes and flour sacks, and they massacred men, women and children with impunity.

But Aboriginal people fought for their land. For example, the Darug nation, led by the renowned warrior Pemulwuy, along with neighboring nations, started a war near what are today the outskirts of Sydney that lasted more than two decades. Aboriginal clans fought guerrilla battles against settlers on the southern island of Tasmania with increasing intensity in the early 19th century.

The attempted exterminations on the frontier eventually evolved into official government policy. Aboriginal people were forced off their land and into missions and reserves. Their children, known as the Stolen Generations, were routinely taken away from their families as part of an attempt to breed Aboriginal people out of existence, a practice that continued into the 20th century.

The most insidious part of the colonial project was the dehumanization of Aboriginal people and the attempt to destroy their culture and knowledge. Aboriginal people had formed a symbiotic relationship with land, sea and sky over tens of thousands of years, and had developed complicated systems of land management and agriculture, interwoven with spirituality. Their children were later told that their people were simply “hunters and gatherers” and their traditional knowledge, sacred sites and languages were devalued and destroyed. The truth is that Aboriginal people are the oldest civilization on earth. There are about 330 known Aboriginal languages, but researchers have found that only 13 are now spoken natively by children.

The legacy of dispossession is felt starkly today. Aboriginal men, women and children are incarcerated at shockingly high rates. In the Northern Territory, for example, 84 percent of the prison population is Aboriginal. Aboriginal women are the fastest growing incarcerated group nationally, with the imprisonment rate rising nearly 120 percent since 2000. Aboriginal children are also tortured behind bars, as was the case at Don Dale Youth Detention Center in the Northern Territory as recently as 2014.

Many Australians, faced with the reality of what Australia Day symbolizes, tell Aboriginal people and their supporters to “get over it.” But for many Aboriginal people, Jan. 26 involves celebrating the symbolic beginning of a state program of genocide. The massacres, the theft of land, the removal of children, the attempted assimilation and the mass imprisonment all trace back to this date.

Without a proper reckoning with the past, a future reconciliation will be impossible. The Frontier Wars remain unrecognized in any official capacity, which is unusual for a country that routinely glorifies war. The history of Aboriginal resistance to colonization has been largely erased. Unlike the United States, Canada and New Zealand, Australia has no treaty with any Aboriginal nation. In 2008, Prime Minister Kevin Rudd, in a high point of his political leadership, made an official apology for the removal of Aboriginal children from their families, but he never offered reparations. The rates of Aboriginal child removal have gone up every year since he promised it would never happen again.

Aboriginal people continue to fight for justice, but the system is stacked against them. The legal fiction of “terra nullius” — a land belonging to no one — was eventually overturned by the High Court in 1992 in what’s famously known as the Mabo case. That paved the way for the Native Title Act, which recognizes Aboriginal rights over land, but only in very specific circumstances, and provides native titleholders with little say in land-use decisions. The few state and territory policies allowing for more but still limited rights for Aboriginal landowners are under constant threat. Too often, laws that govern Aboriginal land rights favor businesses trying to exploit natural resources over preservation-minded titleholders.

The problems facing Aboriginal people require policy makers to work with communities in good faith, using considerable material resources. In this context, symbolism is important. Australia must start by changing the date of Australia’s national celebration.

Increasing numbers of Australians have joined Aboriginal people in resisting the celebrations of Jan. 26 and calling for a proper acknowledgment of the past. Some communities are now discussing whether it is time to find a new day to celebrate. This particular conversation began in the Western Australian town of Fremantle, where the local council voted to move the date. The federal government opposed this proposal, creating controversy but leading the movement to grow.

Maybe, with Aboriginal people at the forefront, we will see how Australia Day could be the beginning of something better. It could be a date that recognizes that the country we now know of as Australia has a history that is tens of thousands of years old. If we need a celebration of this kind at all, perhaps it could be on Mabo Day, June 3, the day in 1992 when terra nullius was formally overturned. This would at least be a more solid foundation from which to build a shared understanding of the country’s history.

Celebrations of genocide could be confined to the annals of history. In the famous words of the Aboriginal singer and songwriter Kev Carmody and Paul Kelly, “from little things, big things grow.”